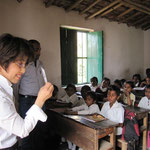 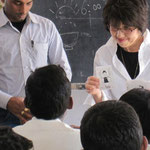 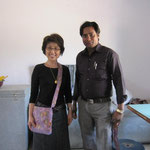 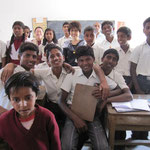 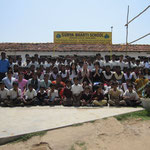 In the spring in 2012, I went to Surya Bharti School as a Japanese language teaching volunteer.

I appreciate all people who took care of me for two weeks.  I had lots of fantastic experiences there, so I would like to share them a little.

In the next day of arriving Bodhgaya, it was sunday and the school was closed, and I visited students' houses with Yuki and principal.

It was a village that there were houses made of mud and huge fields.  Children were playing actively without shoes outside, beside them cows were streching themself out.  A male senior citizen was cutting grass by wheel shaped scythe to make foods for cows.

A doctor was going around the village by bicycle.  An elder sister was taking care of her younger brother.  A woman was bringing water putting a vase on her head.  I felt comfortable with the scenes as if those never belonged fixed time and places.

And girls invited us into their houses happily, and gave us hot chai filled with fresh milk and snacks.

A student brought me to a room where she keeps her textbooks, and showed me the books delightly.  Seeing their happiness of learning and their pride to study at the school, I felt gratitute to the Lord.

Many other children live in the villages gathered friendly and they came after us.  Every family welcomed us warmly, and there were Alter displayed there, and smiled with L sign saying El Cantare.

The students from the village came to the school by walking for 2 hours (4 hours to and from school) before having a bus.

Happy Science helpled to buy a used bus for them, the students come by the bus and it made them concentrate into study to save their time.

Next day, I went to the school first time.  All the students gathered in the ground for morning assebly of prayers.  Their prayers were sirious.

The children looked at me sometimes fron distance, but after the assembly, they were saying "Namaste!" to me walking to own class.

My first Japanese class was class 1( they were so cute).  Showing picture cards brought from Japan, the students in class 1 pronounced very loudly.

When I went to a toilet in the corner of the school in a break, girls students gathered around me and asked many questions.

"Name? family? age?"  "Sing a song!" "Show us your dance!" (age? song? dance? What should I do? (langhing)) I can't dance so I asked them "Let's show me your dance", then, they looked shy, but they showed me dance happilily holding skarts with big smiles.  They are very bright and obedient children.

After school, we had a special Japanese class for some students who are very good at Japanese.  Their level was high, and they were so sirious to listen to my words.  Their eyes were shining.  Some students among them were very active to ask many questions.  I thought all the students like to study indeed.

One sad thig happened.  A girl student was forced to quit the school because of her marriage few days before her graduation from the school.  Girls and boys study together in same class, but there are discrimination about female still now in Indian society, and girls can not say her words.  I hope the time will come soon that women can say their own opinion as a human in society.

There was Holi festival while I was there.

It is a festival of celebrating spring in India, people put colors and water each other to anybody.

We had a fun time of few hours becoming children, putting colors and water toghter with teachers and students although they were always polite.

And best and last memory was that we had a one year memorial celebration of Master's visit. (A camel also attended!)

Children expressed their deep gratitude to the Lord, and showed amazing Indian traditional dance.  I think that the children who make a new El Cantare civilization will become angels of light to fly to the world with also practicing Indian culture.

I wish that all the children can take education, grow their parsonality, and walk on their road of life toward angels of light, I will be happy to support a little to realize it.

I appreciate the Lord given me lots of precious experiences, and also Yuki, principal, and everyone had accepted me there happily.  I am looking forward to seeing the cute children again. Namaste!

Giving Chance of Education to Children in India


There was no school in a village. A few children went to a school by walking long way. Hundreds or more children were playing and working. Of course they could not read and write. They are very poor  and their family can only afford to eat.

We established a school (without tuition fee) in the village.

More than 500 children have got education in our school since 2001.

Why don't you join us?